My notes and thoughts about Linux, WordPress, PHP and many more.

WP_Mock: ( https://github.com/10up/wp_mock ) is an API mocking framework that can be used for unit testing WordPress Plugins. This tutorial is a complete beginner guide to add and integrate WP_Mock mocking framework to your WordPress Plugin. WP_Mock uses Mockery PHP mock object framework for unit testing WordPress plugins. This is how to properly implement unit test inside WordPress plugins and can be considered as one of the best practices. If you are already familiar with mocking and unit testing, you can skip the introduction below and proceed directly to requirements and steps section.

Below are some introduction for beginners:

This tutorial works best with a Linux environment such as Ubuntu. Also it assumes you will be using GitHub as your code repository manager to store your plugin. Although concepts can be applied to other UNIX based OS such as Mac or other git repository manager such as

Assuming you have the following plugin structure:

The above structure is common to many plugin nowadays. Again that’s an example only and its simplified for the sake of this tutorial.

Now you have all the requirements set, below are the steps to integrate WP_Mock to the above example plugin.

Now you are all set. This is how the demo plugin structure would look like after completing the above integration and installation of third party libraries for using with your tests. 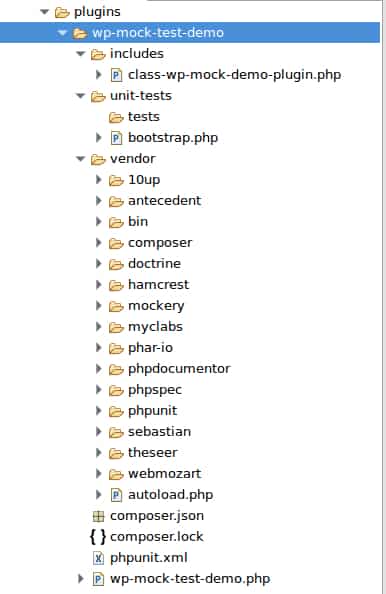 Once the above installation of the third party dependencies are done with composer. You are now ready to write your first unit test with WP_Mock! Let’s use the above example plugin in writing test. Supposing the plugin class class-wp-mock-demo-plugin.php contains the following code:

Based on the class code, there are two methods. The first method init_hooks is meant to initialize plugin hooks. The second method is the callback to the WordPress filter document_title_parts. The objective is to append login status to the title of the WordPress post or pages. Supposing you will test that these two methods works as intended. You will need to write two unit tests:

Finally to write your own unit test:

Please read the code comments in the test for details. Explaining this is beyond the scope of this tutorial. For more information, please refer to these following documentations:

To run the test, execute this at the terminal:

The test results will be shown like the one below:

You can get the sample demo plugin used in this tutorial in GitHub: https://github.com/codex-m/wp-mock-test-demo

This site uses Akismet to reduce spam. Learn how your comment data is processed.

This website uses cookies to improve your experience while you navigate through the website. Out of these, the cookies that are categorized as necessary are stored on your browser as they are essential for the working of basic functionalities of the website. We also use third-party cookies that help us analyze and understand how you use this website. These cookies will be stored in your browser only with your consent. You also have the option to opt-out of these cookies. But opting out of some of these cookies may affect your browsing experience.
Necessary Always Enabled
Necessary cookies are absolutely essential for the website to function properly. This category only includes cookies that ensures basic functionalities and security features of the website. These cookies do not store any personal information.
Non-necessary
Any cookies that may not be particularly necessary for the website to function and is used specifically to collect user personal data via analytics, ads, other embedded contents are termed as non-necessary cookies. It is mandatory to procure user consent prior to running these cookies on your website.
SAVE & ACCEPT